The King of Rock and Roll found a hidden paradise when he leased this home in the mid-1960s. Elvis and his new bride Priscilla famously spent their honeymoon here on May 1, 1967. Daughter Lisa was born exactly nine months later. 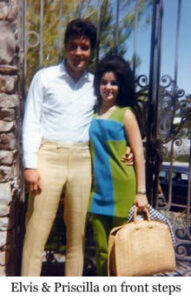 On September 16, 1966, Elvis leased the estate at 1350 Ladera Circle, Palm Springs, California for one year for $21,000.  Colonel Tom Parker, Elvis’ manager, lived in the neighborhood and he thought that it would be the perfect place for Elvis to relax, entertain his friends, and escape from Hollywood.

However, Rona Barrett, the famous gossip columnist also lived around the corner. She became suspicious that Elvis and Priscilla were going to be married when Priscilla Beaulieu arrived on the weekend of April 29th 1967 with her entire family.

Elvis’ entourage also began to assemble (Joan and Joe Esposito, George Klein, Sandy and Jerry Schilling, Marty Lacker, Dee and Vernon Presley). Apparently “Miss Rona” even had the estate’s maid followed in order to find out when and where the wedding would take place.

Then Rona announced on her nightly television broadcast that “the King and Priscilla are to be married in Palm Springs!”

Originally, the plan was to have the wedding and reception take place around the pool at the estate but because of the onslaught of the press and media, Colonel Parker arranged for Elvis and Priscilla to be married in Las Vegas. Private transportation provided by friend, Frank Sinatra.

Escorted by Joe Esposito, the best man, they slipped out of the house at 3:00 am on Monday morning. May 1st, 1967, going out the back way, by the pool and across the fruit orchard to Rose Avenue where limos were waiting to drive them to the airport. 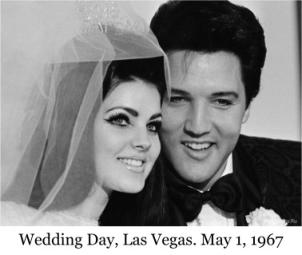 They flew to Las Vegas in Frank Sinatra’s Lear jet, the “Christina”, and by 5:00 am the marriage license was obtained at the court house. At 11:00 am, the wedding ceremony took place at the Aladdin Hotel, in owner Milton Prell’s suite.

The ceremony was followed by a breakfast reception for approximately 100 guests.

Elvis carried Priscilla over the threshold and up the stairs of the Honeymoon Hideaway singing the “Hawaiian Wedding Song” from the movie Blue Hawaii. Lisa Marie Presley was born February 1, 1968, exactly 9 months from the date of the honeymoon.

The next day, Elvis went to United Artists in L.A. to finish “Clambake” and then hurried back to Palm Springs the same evening. It is believed that the “1968 Come Back Special” was planned during the many months Elvis spent at the estate.

After this concert, Elvis made numerous personal and concert appearances which led to him becoming the “Entertainer of the Century”. 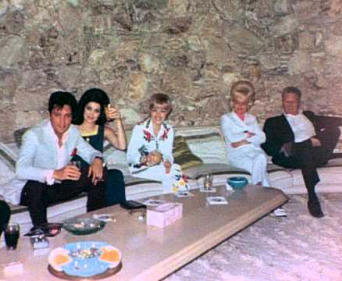 Palm Springs Royalty, the Alexanders were pioneers of Mid-Century Modernism and the center of all social activities in Palm Springs in the 1960s. This was their masterpiece, the forever fabulous historic Las Palmas estate. 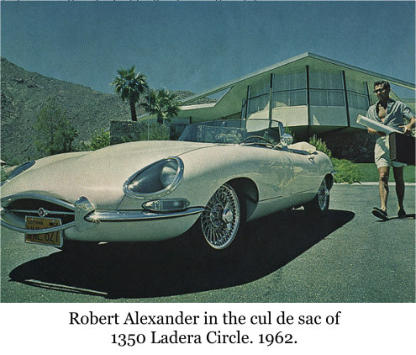 The Alexanders became national celebrities when an eight page article appeared in Look Magazine in September 1962. It showed the Alexander family in their new home at Ladera Circle, and the readers got a peek at “The Way Out Way of Life” in the “House of Tomorrow”.

Barbara Sinatra, a close friend of Helene Alexander, has explained that there was an entire group of friends in Palm Springs who were living an exciting life which included memorable dinner parties and fabulous lunches.

On November 14, 1965, when it was announced that the Alexanders had been instantly killed in a private plane crash, the entire city of Palm Springs went into mourning.

The Alexander family enjoyed this life to the fullest. They played tennis, rode horses and water skied. The local newspapers often praised the Alexanders for their support of many civic organizations and their contributions to many charities. 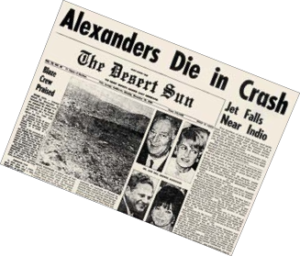 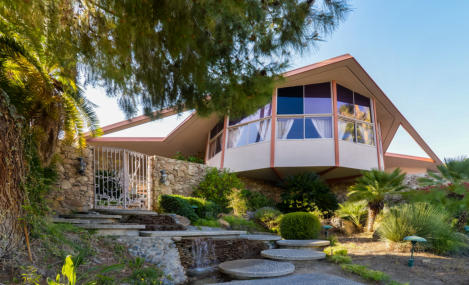 The Honeymoon Hideaway was restored in the 1990s to its original 1960s splendor. It is truly a “rock-star’s house" with the capacity of 180 people. The house features art deco design and furnishings throughout the spacious living room, dining room, den, kitchen and honeymoon master suite. The estate’s secluded grounds include a large pool with a stage, a private garden, a fruit orchard and a tennis court.

The homes built by the Alexanders in Palm Springs have held up remarkably well over the years. They are wonderful examples of mid-century modern architecture. The simple post-and-beam construction, the exposed beamed ceilings, the sloping roofs with deep overhangs, the wide expanses of glass, the open floor plans, as well as the trademark closets boxed below the ceiling, make the homes works of art. “The open floor plan is to a designer what a blank canvas is to a painter”.

Elvis has left the building. Tours are no longer available at this location, thank you very much.